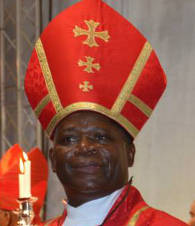 He was previously the Dean of Maciene Cathedral, and before that a priest in the parish of SS. Stephen and Lawrence, Maxaquene.

Fr Carlos Simao Matsinhe was born on 2nd October 1954 in the Homoine District of Cambane, region in Inhambane Province. His Primary education was in a Roman Catholic missionary school in Homoine. He completed Secondary education in 1974 at Our Lady of the Immaculate Conception College in Inhambane.

In January 1975 he entered theological education in the Anglican Seminary of St Mark in Dar-es-Salaam in Tanzania. He gained a diploma in theology from the University of Makerere, Kampala Uganda. In January 1980 he was ordained priest in the Diocese of Lebombo within the Anglican Communion in Mozambique.

He took on the formal role of Dean in the Cathedral Church of St Augustine in Maciene in Gaza Province. He also had responsibility for Education, Community Health and Development Projects in the Diocese.

He is married to Hortencia Samuel and they have five children.

Some key facts about the diocese

The Links between Lebombo and London

See more about the links between parishes in Lebombo and London …

Background to the Anglican Church in Lebombo