MENU
Home > What We Do > Advocacy

Advocacy is a key part of being in relationship with those whose lives are very different from our own. When ALMA began in 1998 Mozambique was officially the world’s poorest country. In 2002 UNICEF declared Angola the worst place in the world to be a child. Both countries have emerged from a long colonial legacy and civil war, extremely prolonged in Angola’s case. We have much to learn from Angola and Mozambique . The church’s preparation for peace programmes, and transformative ‘swords into ploughshares’ programme in Mozambique are world firsts and lead the way for post conflict countries engaging in reconciliation. 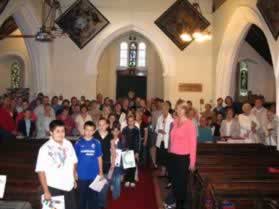 Stand up Against Poverty
16 Oct 2006 at St Mary's Littleton

In other areas though we can help by speaking up and taking action about issues such as debt, trade justice, HIV/AIDS, and malaria, which directly affect the quality of life of our partner dioceses. Poverty reduction is a biblical imperative and ALMA Parishes have played a full part in this. They have supported Jubilee 2000 and Jubilee Debt Campaign; the Trade Justice Movement; MAKE POVERTY HISTORY; STAND UP AGAINST POVERTY and a representative from ALMA has been on the steering group of the new Coalition Against Malaria.

The five marks of mission of the Anglican Communion inform our advocacy. In ALMA we seek to:

“The suffering of Christ seen from the perspective of the poor is so different to the perspective of those who have access to effective health care. In our teaching, we are keen to connect with all aspects of life. The Christian Faith needs to talk about development and justice issues, as well as evangelism and the gospel. We are promoting a holistic view of the Christian faith, which is particularly important in a country where poverty is such a major concern for many people.”

The Millennium Development Goals for 2015 are a benchmark for advocacy. The goal is to reach the following targets:

What can I do? What can my church do?

Sometimes when the issues are difficult and complex we can feel powerless to help so it can be useful to look at them from the perspective of Angola and Mozambique .

For example Bishop Dinis motivated many to become involved in Jubilee 2000 and Jubilee Debt Campaign. In the 1998 ALMA handbook he says :

“Foreign debt is enslavement of citizens, before they are born, during their lifetime, after they die.  It is a kind of silent genocide”

In 1998, when 70,000 people encircled Birmingham at the time of the G8 summit calling for the cancellation of the unpayable debts of the world’s poorest countries, how many would have predicted that in 2006 Mozambique’s debt would be cancelled?

Debt reduction has been delayed for many years because governments have been unwilling to admit they have made bad loans, and it is only pressure by Jubilee 2000 and other groups that has made the difference.

Without doubt ordinary Christians have played a major part in the success of the debt campaign.

In our own churches: 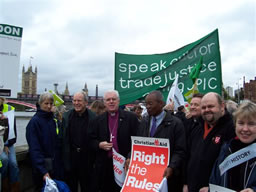 Bishop Michael, Chair of ALMA , with ALMA Reps, London Clergy and Christians at the Trade Justice Lobby of Parliament Nov 2005

For more details, information and suggestions on advocacy with specific reference to Angola and Mozambique do click on the hyperlinks and look at the wider issues section of the website: