‘For the Church of the 21st Century, good ecology is not an optional extra but a matter of justice. It is therefore central to what it means to be a Christian.’

Archbishop Rowan Williams, together with leaders of every world faith, has signed a statement which emphasises that ‘tackling climate change is a moral imperative’.

Climate Change in Angola and Mozambique 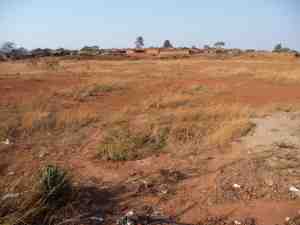 There are two new studies that may be useful for us as ALMA Reps and Friends that may help our wider church communities engage with the reality of Climate Change which is a  key development and justice issue.

i) A briefing paper from ACTSA (Action for Southern Africa) ‘September 2009 Climate Change in Southern Africa’. The cover of the report is a picture of a storm brewing on Mozambique’s coast, there is a front piece quote from Mozambique’s President Armando Guebuza:

‘Climate change can undermine our continuing efforts to achieve the Millennium Development Goals … Reducing the impact of climate change must involve greater commitment to the search for local solutions to the adversities arising from such phenomena as droughts or floods.’

‘Climate change is not just an environmental and economic crisis in the making – it is a global injustice on a scandalous scale. It is the world’s poorest communities who are the most vulnerable to climactic extremes, who are already suffering and who are likely to suffer the most in the future, even though they contribute so little to the carbon emissions which are precipitating them.’

as well as a case study from Mozambique: ‘Flooding and Drought in Mozambique’. It leaves no doubt that the impact of climate change is real and already affecting our partners.

ii) ‘Climate change and Africa’s Natural Resources’ by William Minter and Anita Wheeler emphasises that Africa is predicted to ‘suffer consequences out of all proportion to its contribution to global warming, which is primarily caused by greenhouse gas emissions from wealthy countries’.  Africa is particularly vulnerable to climate change, notes the International Panel on Climate Change. Factors such as dependence on rain-fed agriculture and the impact of warming on the spread of disease reinforce multiple pre-existing stresses. Like AIDS, the threat is already here. The toll is rising. Even more damaging effects will play out over decades.

Yet global warming comes primarily from greenhouse gas emissions outside Africa. Much of Africa’s share, moreover, comes from extracting natural resources to be exported. According to the latest estimates, the entire African continent was responsible for only 3.7% of the world’s annual CO2 emissions, compared to China with 21.5%, the United States with 20%, and the European Union with 14%.

Flooding in Angola and Mozambique

Flooding has occurred many times during the ALMA Partnership most notably in the huge Zambezi flood of 2000 (see the BBC News story). There have also been major floods in 2007, 2008 and 2009.

‘Just as we look back on previous times with incredulity and wonder how people, especially believers, could have not only condoned but succoured the slave trade and slavery, so in later years I think subsequent generations, who will live consciously with the reality that the earth is not a limitless larder, will find it difficult to understand how we could have described ourselves so uncritically as: “consumers.”’

In 2007 there were severe floods that made international news headlines. We launched an emergency appeal on Ash Wednesday alongside the Lent Appeal. Our partners kept us up to date with news.

In March 2007 there was also coastal flooding: ‘Unprecedented flooding of low lying coastal areas this past week was caused by global warming according to some Mozambican officials. High spring tides were stronger this year because of the alignment of the sun, moon, and earth (which also caused the eclipse), flooding low lying neighbourhoods all along the coast last week. But there are suggestions that the flooding was worse than in the past because of rising sea levels caused by global warming.’

In January 2008 there were more floods in Mozambique and both Bishop Dinis and Revd Helen Van Koevering shared news of the impact of the floods and the role of the church in helping people. We saw the devastation on the faces of Shire villagers as the newly built well was inundated and collapsed. 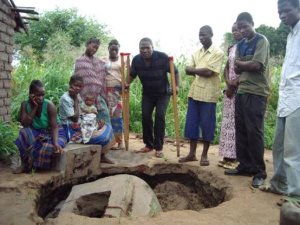 The collapsed well at Shire 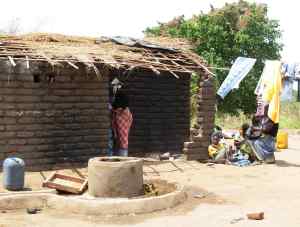 In 2009 there was more flooding. A news report from Adam Berthoud of Oxfam reports:

‘Another year, another flood. For the third year in a row now there is flooding across several Southern Africa countries. In Southern Angola, Cunene Province is under water again and the now-ubiquitous tented camps swell in the provincial capital Ondjiva as people arrive in hope of finding some assistance from the government and NGOs like Oxfam. In neighbouring Namibia, river levels have reached a 40-year high, whilst in Western Zambia the islands in the Zambezi floodplain, where people traditionally seek refuge during the seasonal flooding, have started to disappear. Everyone is now monitoring the weather forecasts to see if more rain will fall and worsen the flooding. And as most of Southern Africa's rivers end up in Mozambique, we're nervously watching the levels of the Kariba and Cahorra Bassa dams, to see whether Mozambique will be the next country submerged by floodwaters.’

See the full blog entry on the Oxfam site.

What we can do

Four suggested responses that we might make here in London are:

The Church of England has a campaign “Shrinking the Footprint”, and the Diocese of London is taking an active part in it. One page of their site looks at our global conscience and responsibilities towards our neighbour.