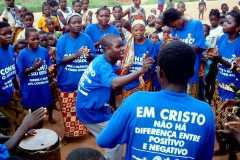 Equipas da Vida teams (Life teams) in Niassa, with their blue T shirts proclaiming
In Christ there is no positive or negative.

There is a video about the Equipas da Vida teams, with Rebecca Vander Meulen explaining how they work.

Each year, on World AIDS Day, Rebecca Vander Meulen offers some reflections on AIDS. (Rebecca is the Head of Mission, Diocese of Niassa.)

‘HIV and AIDS Challenges and the Church’ - news from Bishop André Soares on an HIV initiative in Angola: REDE ESPERANÇA which he, Luandan clergy and the Luandan Clergy wives are leading

2006 update from the Anglican Church of Southern Africa

World AIDS Day 2006: read a press release from Angola. The service included a presentation of AIDS education in Niassa Diocese (

Road show spreads the word about HIV in Chimoio, a town in north-western Mozambique where Kubatsirana is located.

Poverty does not cause AIDS, but it creates an environment which allows it to flourish. The AIDS poverty tree is a way of understanding how poverty fuels the AIDS pandemic and how AIDS perpetuates poverty.

Click on the tree for a full sized version.