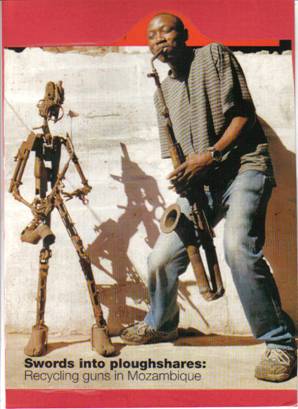 There are said to be millions of guns buried in caches all over Mozambique, a legacy of the country’s bitter 16-year civil war.

When the cease-fire was agreed in 1992, United Nations troops were meant to disarm both sides, but most weapons remained hidden.

Since 1995, the Christian Council of Mozambique (CCM) has been working to help people exchange tools of war for tools to earn a living through the Transforming Arms into Tools project.

Those who give up their weapons are given tools – most commonly sewing machines, hoes, bicycles, but also a variety of construction materials.

The weapons are cut up and the pieces handed over to a group of Mozambican artists who turn them into sculptures.

The Mozambique government supports the operation. It knows former rebels would not hand in weapons to the authorities for fear of prosecution.

The project was principally initiated by Bishop Dinis Sengulane after his considerable contribution to the peace negotiations. Thanks also to Graca Machel (the project’s Patron) and peace advocate Masuru Kataoka from Japan.

In February 2005 Bishop Dinis came to London to open an African exhibition at the British Museum. A focal point was the sculpture called The Tree of Life. (This scupture featured in the BBC series “History of the World in 100 objects” with Neil MacGregor, Director of the British Museum. The podcasts are available, and this was object 98.)